The showcase was held on a digital platform that allows users to “walk” around different floors of a school, view art on walls, and attend live presentations. At this past showcase, we had over 100 people roaming the halls, mingling, and attending presentations. A big thank you to all the students who participated in the showcase and friends and family members who came out to support!

With student permission, we are proud to share with you some project highlights:

Heinrich Geissler invented another way to produce light through the use of gas particles in 1857. Josiah explained that this Geissler Tube works by running an electric current through gas in a glass vacuum. The electricity causes the electrons of the gas atoms to become temporarily excited, or move up an energy level. When the electrons move back to their original positions, they release energy in the form of light. He used the air in his room during his online demonstration, which glowed a bright magenta due to the abundance of nitrogen. Geissler tubes are a precursor to modern day neon lights.

“Making this Geissler tube took around 6 weeks, mainly because of trial and error of two other tube designs that didn’t work,” Josiah said. “It is slightly frustrating when things don’t fit, but I like problem solving and see it as a challenge to come up with a way to make it work. The making of the final version of the tube (the one you see here) took only a few days and counts as engineering, physics, and chemistry academic credit. As for what’s next for the project – I would like to experiment with flowing different gasses through it as it’s running and observe the change in discharge color and intensity”. 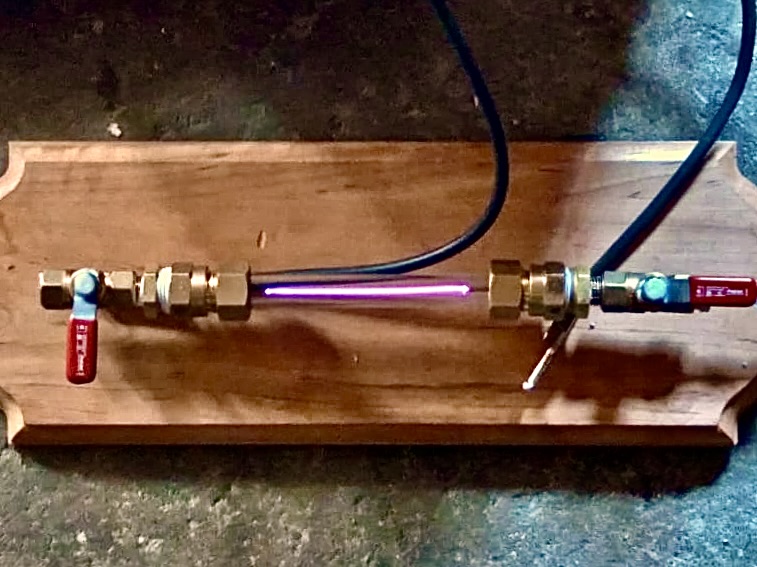 The technology around space travel is rapidly progressing, and is an exciting area of science research. Ava took a look at how the human body is impacted by the conditions of space, from the amount and intensity of light available to the disruption to the human microbiome. She ties this in with the concept of “biophilia”, a term coined by E.O. Wilson that describes the human tendency to want to interact with other forms of life.  Her research takes her all the way from the history of biophilia to examining the ways humans have interacted with their environment over time:

Kira had many pieces on display in the art gallery, including this design of a pomegranate flower inspired by local tattoo artists’ own designs. Two hands are each holding the pomegranate, which is split open. A flower grows upward from the fruit.

“I was inspired by one of Chloe Anderson’s forearm sleeve tattoos, which have flowers and hands,” said Kira. “I used it to tell the story of the pomegranate with Persephone and Hades, where she eats it as a compromise since I was doing a tattoo study for awhile. It’s actually one of my tattoo designs.”

Julia presented her research on the history of feminism and its different waves in one of the galleries at the showcase. Her research looked at First Wave Feminism, which focused on achieving the right to vote and Second Wave Feminism, which focused on securing rights beyond voting. Julia looks into the tensions and racial dynamics of these movements, which were exclusively catering to the needs of white women. In her research, Julia shows how the work of early and modern Black and Indigenous feminists in the United States like Ida B. Wells, Marie Louise Bottineau Baldwin, and Dr. Kimberle Crenshaw helped build the foundation for Third Wave Feminism, which aims to secure the rights and justice for all women through intersectional political frameworks.

If you’d like to learn more about our innovative high school program, click here to request information about Sora.

To cap off our comparison series about top online high schools, we’re comparing Sora against National University Virtual High School.  This series has been all about helping you know what key characteristics to look for to find the top school for your child’s needs. If you’ve missed out on this series, you can access it […]

Josiah has been a student at Sora for a year now. He loves mechanical engineering and working with his hands. He shares how Sora helps him receive high school credit for doing what he loves: building new exciting creations. John: Welcome, Josiah. Tell us about your schooling background before Sora.  Josiah: Before Sora, I was […]